Friendship has been implementing the cervical cancer screening and treatment program in the northern region of Bangladesh at two floating hospitals, two clinics at Gaibandha and Chilmari, and the Friendship Hospital Shyamnagar in the south. The programme uses a standard protocol including visual inspection with acetic acid (VIA), colposcopy, cryotherapy and thermal ablation in regular projects .

The map shows the activities that were carried out in north and south Bangladesh in control and intervention areas of PRESCRIP-TEC.

What should have been a regular visit to Gaibandha in mid-June, to get an overview of the field activities, became an odyssey for the team. The Brahmaputra River flood season typically occurs during July and August. This year, however, an early and unexpected flood occurred. It was caused by heavy downpours following a weeks-long heatwave, as well as runoff from across the border with India.

Acting during the health emergency

Due to the floods and rising water levels, some of the activities of the PRESCRIP-TEC project had been interrupted on the ground in order to provide support in the emergency medical camp in Sariakandi Upazila. AWACAN baseline recording, swab collection and EMR training had to stop due to the flooding, slippery roads, and women suffering from acute diseases from contaminated drinking water. They were suffering from fungal infections, worm infestations, acute diarrhea, and more.

Emergency medical camps were set up in flood affected areas. Friendship Community MedicAids (FCM’s) and other service providers supplied medicine and saline to flood affected communities in the North.

In the south the project’s baseline activities were continued as the area was not flooded. Due to heavy rainfall, however, the team sometimes had to stop the collection and this affected achieving targets by the due dates.

In the affected areas, communities were mostly able to ensure that they had dry food stocks at home. But they were in urgent need of mobility, health services, clean water and latrines.

Due to the flooding patients visited the EFH by using small, locally made banana bark boats. Boats were parked under what is usually the patients’ shade. Patients’ beds are on the roof , in order to protect it from flood water. As it is made up of wood, due to water it will be damaged, so to save it, it has been shifted on the roof of shade, where access to water is limited. Flood water was 4 feet deep at the time of our visit.

As a result of the flood emergency, work at PRESCRIP-TEC was slow – but did not stop. Flexibility was a key factor in carrying out our activities. No matter how important the test is or the service is free of charge, participants had strong reasons not to participate at this time of the day as the home, front and back yards are flooded, saving household belongings is the priority.

Once all possible support had been provided, the teams continued with the project activities but transport was a challenge. The roads were waterlogged and even when using a small boat for transport, they found it difficult to get close to the chars. The water was shallow, and the weeds in the water can get stuck in and damage the boat’s engine. As a result, the teams traveled to villages and homes by walking on muddy and slippery paths.

A muddy and slippery road going down to visit an FCMs house/Khana.

In some cases, women preferred collecting the HPV self-test samples at their own homes, because their husbands would not let them travel or go to the FCMs house.

Besides the logistical problems caused by the floods, there were also setbacks in the research. These were, however, quickly resolved due to dedication of team members and the continuous communication between them. One example was the baseline in Kurigram. Data collectors did not understand the questionnaire properly as a result the data was entered wrongly so icddr’b and FRIENDSHIP, after speaking to the data collectors and the project coordinator, identified the problems and corrected them by giving again online training to the data collectors on AWACAN Baseline tool. This is important for the project.

Interpersonal issues can arise in any project, but these can be overcome by counseling and good communication. In the end, the indicators were completed on time, the baseline was successfully completed in the intervention areas, and monitoring is on track for completion by the end of July.

In general, the PRESCRIP-TEC project is progressing well in Bangladesh. After 18 months the first practical trials have been successfully completed. We would like to thank the whole team! Our deep respect for all the work you have done, despite the rain, mud, and the personal hardships you had to endure. Hearing the stories and seeing the pictures is very inspiring.

Photos of the activities of the journey 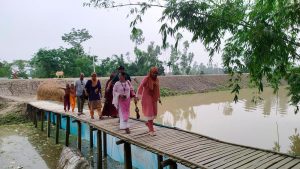 Crossing a small footbridge that is a connection between the high road and the low muddy roads in the villages that were flooded in some areas. 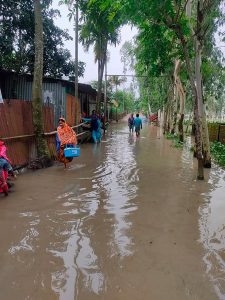 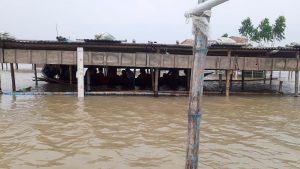 Patients were using small boats to reach the EFH. Here they can be seen taking shelter from the heat and rain under the patient’s shade which is under water. 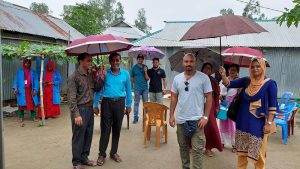 Sudden rainfall at the FCM’s khana. 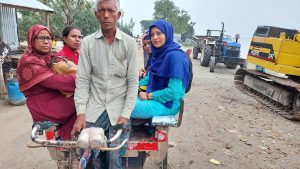 Together, we can end cervical cancer!